Email me today to start your journey 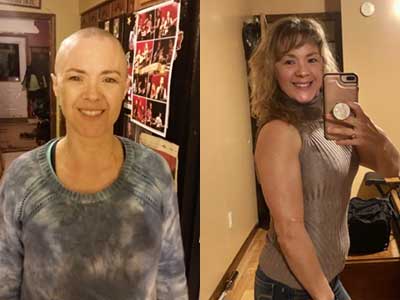 Over the years I have gone to the gym a handful of times just to quit after 3 months. I use to think “I have no time and I hate the gym” I used to let everything take precedents over me and my time to exercise.

Well, I was dealt a challenge in 2016 to fight and beat Breast Cancer. 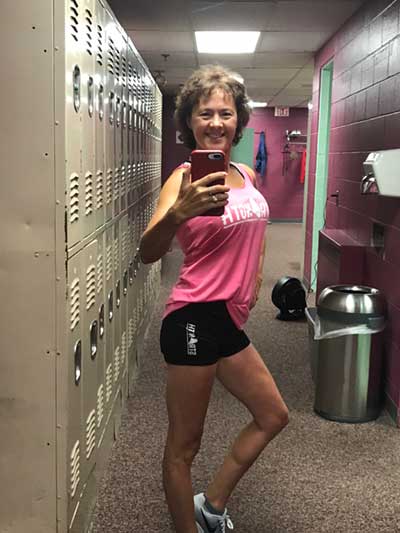 It was stage 3A. Cancer had gone into lymph nodes and started escaping one so I had to have 7 removed. I had the expanders put in when they did my double mastectomy.  I had a port put in for chemo administration and I endured 5 months of chemo then 2 months of radiation. I had my expanders filled then after radiation was done Nov 9, 2016 I had my surgery to remove my expanders and get my implants in. I was so happy to finally get the very hard uncomfortable expanders out and some nice soft implants in. I had my implant surgery on May 24, 2017. It was a long brutal journey for sure. Some days were better than others. I never sat on the couch in my life as much as I did that year. Chemo was rough and I was on about 4 or 5 anti-nausea pills and still got nauseous. I ate snacks in the middle of the night and upon waking in the morning to help prevent some of the nausea. I cried when I found out I had to have radiation for sure I made the doctor proof to me why I needed radiation. I faired quite well during radiation. I tried to make it interesting by wearing a different pair of boots to each appointment. I had to go 5 days per week for 2 months. So, yes I have a lot of boots but it was the topic of conversation rather than focus on the cancer and radiation itself.

Once my journey was completed I decided I was joining the gym and I did that on August 1, 2017. I have been consistent ever since.

I hired a personal trainer, got measurements monthly and fell in love with the gym. I was hooked.  I then went to another gym and met another personal trainer/owner of the gym that I went to before years ago, Wes of Littlefield's gym. He put me on a different workout regimen. Taught me to focus on the muscle being worked and to slow down to maximize my efforts. I learned a lot from him. However, I was getting frustrated that I couldn’t find someone who knew enough about the nutrition piece to help me complete my goals. I knew that it was an important missing component. I heard about the app MYPlate and started to use that at least it was something. Finally, August 29, 2019 I had my first meeting with my coaches Crystal and JR Leigh (Team Muscle Time). I finally found someone (well 2 actually, husband & wife team) that knew about nutrition and could put me on a meal plan to help me achieve all of my goals. It was that missing important part that was holding me back. They are body builders, competitors and do the nutrition piece. They have over 30 years experience. Currently, I am still on their team and I go from eating intuitively for a few months then on a meal plan to cut.

It will be 4 years in August that I have been in the weight room and 2 years that I have been working with my coaches. I am in love with the fitness life, all that I have learned and continue to learn. I look forward to sharing my knowledge with you.